Wonderful nature and incredible sights best describe the beauty of Lori with all its charm. Vanadzor, which is the administrative center of the region, is considered the third largest city in Armenia. Lori is one of the industrial regions of Armenia. A number of objects of cornerstone importance of the industrial branch of the Armenian economy operate here. Against the background of industrial development, agriculture is less developed.

Lori stands out with its rich cultural heritage and historical past, which is evidenced by dozens of monasteries, fortresses, castles and monuments. The diversity of original historical and cultural monuments is partly conditioned by the fact that in the 10th-12th centuries there was an independent Armenian statehood in the form of the kingdom Lori or Tashir-Dzoraget. 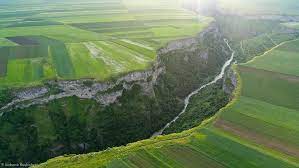 "Lori" is first mentioned in the 11th century and may be related to the name of the bird quail. That year King David I Anhoghin Kyurikyan founded Lori or Lore fortress at the part of crossing of Dzoraget and In Urut gorges. In 1065, the fortress became the capital of the kingdom of Tashir-Dzoraget, which, in turn, became independent from the Bagratuni kingdom of Ani. Later, the name "Lori" spread to the whole province of Tashir. This is the name of a number of geographical objects within the borders of the historical Gugark province of Armenia, including Loriget and the Lori plateau.

Within the framework of the two-day tour to Lori organized by the Positive Day Tour , we will visit

We will start our two-day tour by visiting the Odzun village.  Odzun is one of the largest villages in Lori, surrounded by dense forested mountain ranges. In the center of the village there are Surb Astvatsatsin Church of Odzun (Khachgund Church), Odzun Cathedral (6-7 centuries), St. Hovhannes (Khachgund) (717-728) and Tsiranavor (Tsaghkevank) Churches (5-7 centuries), Horomayr Monastery (18th century), the monument-mortuary of Odzun (5-6th centuries).

According to one version, the name comes from the consecrated words of Odzun. According to the legend, the apostle Thomas came to Odzun in the first century, consecrated priests and bishops here, and before going to India, at the altar of the present St. Astvatsatsin Church, wrapped the diaper of Christ (as evidenced by the VI century inscription on the south door of the church). But, of course, the name of the settlement has older roots as well. Dragon worship has existed in Armenia for thousands of years. And in Armenian epic stories, the snake and the dragon are often identified. Moreover, we have had many settlements in historical Armenia called Odz. Therefore, the etymology of Odzun should be sought in the depths of millennia. We also find the names Azun, Odzun, Azu in different chronicles. The village was quite famous in the Middle Ages thanks to the Armenian Catholicos Hovhan Odznetsi Imastaser (717-728).

The domed basilica church of Odzun is located in the center of the village, visible from almost all corners of the village. The inscriptions of the church do not give any information about the date of the foundation of the church. But architectural and artistic analyzes show that it was built in the 6th century.

The current church building was built in the 5th century, the older one in the 4th century on the site of a single-nave basilica-type church built by Trdat III. It was covered with logs in the 5th century, and the dome and stone arches were added in the 6th century. In the 8th century, Hovhan Odznetsi replaced the tile roof tiles with stone. In 1888 the Abovyans added bell towers.

The church was named Surb Astvatsatsin, Surb Nshan, Surb Hovhannes, Khachgond, Khachgund. The latter is connected with the name of the priest Khachgund buried in the churchyard, in whose memory in 1291 they erected a khachkar decorated with an inscription. Near the church there is a monument of the early Christian period, which is a magnificent monument marking the victory of Christianity in Armenia. 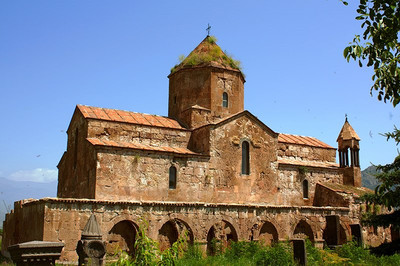 Next we will visit the Sanahin monastery complex, which is a famous cultural, and  scientific-educational center of the 10th century in the Sanahin district of Alaverdi. According to folk etymology, "Sanahin" means “older than him” (Haghpat), we can interpret it as a san-old, old boiler. The Sanahin monastery complex, together with Haghpat, is included in the UNESCO World Heritage Sites.

Surb Astvatsatsin Church was built in the 30s and 40s of the 10th century during the reign of King Abbas I Bagratuni. In 966, King Ashot III the Merciful and Queen Khosrovanuysh built the Church of the Holy Savior for their sons Kyurike (Gurgen) and Smbat's work, founded a congregation and a high school, and invited clergymen, scholars and scribes. The founding abbot was Polycarp, who was succeeded by the scholar Hovhannes.

Church South of Surb Astvatsatsin Church is Amenaprkich Church, the main temple of the monastery, which was built in 957-966 by Ashot III Voghormats's wife, Khosrovanuysh. In the 80s the St. Astvatsatsin and St. Amenaprkich churches had a common vestibule, which is mentioned in the proclamation of King Kyurike I in "Kotuk" of Sanahin, in which he presented two magnificent chandeliers to the monastery. This structure was probably demolished during the large-scale construction works of 1181, while building the new vestibule of the St. Amenaprkich. 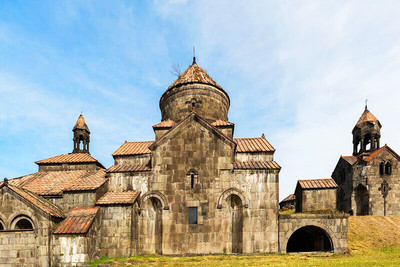 The Haghpat monastery complex is located in the Haghpat village and has a great cultural significance. The complex consists of a number of structures: a bell tower, a chapel, a vestibule, churches, a refectory and a bookstore. The buildings were built in different periods, the earliest of which dates back to the 10th century. Haghpat served not only as a religious but also as a major educational center. Many manuscripts were written, copied and flourished in Haghpat, which were also used in other scientific-educational centers of medieval Armenia. Many famous psychologists of the time have studied, created and taught here.

Haghpat’s name is associated with many legends. One of the ancient rulers invited him in for a recognized master of building a monastery. The master introduces himself to the prince with his son. During the work, a dispute arises between the son and father. One of the sub-masters takes the son's side. Thus, fighting with the father, the son quits his job, gets up and leaves. On the way, another prince hires them to build his monastery. When the walls raised by his son reach so high that they become visible from Sanahin. So, the workers report it to the old master. He decides to visit his son's construction, approaches the half-built monastery wall and examines it for a long time. Everyone was silently waiting for the old master's assessment. Finally, he pushed the stone and said: "Akh pat" which means “Oh, the wall”. Here the father and son hugged and reconciled. And the name of the monastery remained "Haghpat". 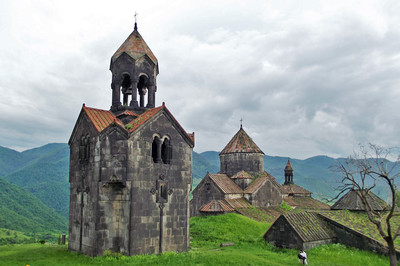 We continue the way to another wonderful place in Haghpat village, Zarni-Parni Cave Fortress, built in the 10th-12th centuries. In the 11th-12th centuries, the Armenian chronicler Hovhannes Imastaser tried here. This fortress was a safe place for the books of the Haghpatavank, which were hidden here and could be saved from destruction. The monument consists of "Zarni Er", "Parni Er" and "Tsak Er" caves.

It is interesting that here you can find traditional vineyards, wineries, and national games. There is a museum, which displays samples, representing the life and culture of the local population. The presence of a vineyard inside the fortress proves that people lived here and were engaged in winemaking. Inside the cave are the rare items representing the life and culture of Lori: plow, yoke, dungeon or dungeon, jars, basins and various items used in the economy, swords. 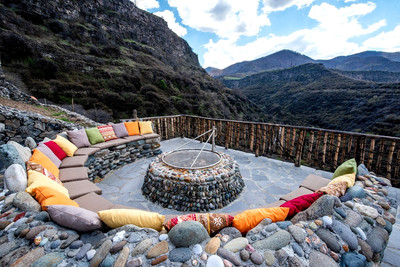 And we will finish the first day full of impressions by visiting “Mendz Er” cave-fortress. It is located on the road leading to Sanahin-Sarahart district of Alaverdi city. It has already managed to become one of the most visited tourist centers in Lori. The formerly inhabited cave, which later served as a hiding place and then as a barn, is now a museum, home to the locally known "Mendz er" lodge , with life-size mannequins, a forge, and a small pond inside the cave.

In every corner of the natural cave that has become a museum, mannequins depict a certain period of life and several professions. In another corner, the 200-year-old metallurgical Alaverdi forge, the model of the Alaverdi bridge, and metalworking are created and depicted. 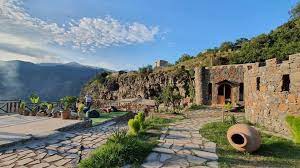 We will spend the night in a 3-star hotel in Vanadzor, and in the morning, after breakfast, we will have even more interesting and beautiful visits to the Lori.

Thus, we continue our way to Dsegh with its many sights. 2 km north-east of Dsegh village is Bardzrakash St. Gregory Monastery. The monastery complex is dedicated to the first Armenian Catholicos St. Gregory. According to the legend, the complex did not have a long life, the latest inscriptions on the walls date back to the XIII century. The monastery has reached our times in a completely ruined state. The complex consists of two churches, the vestibule, the chapel, the Mamikonyan family cemetery, the oil mill, and the remains of khachkars. The two churches that make up the main group are placed next to each other in a row.

The main church is St. Astvatsatsin (it is given by that name in the large number of inscriptions kept on the walls), which is located in the "vestibule" of the previous church. According to the inscription of the lower part of the southern wall in 1221, the construction of the high-weight monastery was started by Hamazasp Mamikonyan's grandson Martspan, son of Sargis, during the reign of George - son of Tamar.

The St. Astvatsatsin Katoghike stands out with its originality. Its remarkable features are the pentagonal tabernacle and the use of twin columns instead of pillars. The Catholicos is rich in sculptures, with a large number of extensive inscriptions, which contain rich historical information.

To the south of the monastery there is a medieval cemetery, where in addition to tombstones, there are many remarkable khachkars, standing or falling from pedestals, most of which date back to the XIII century.

In the area of ​​the cemetery there is the St. Harutyun chapel. Its three walls and roof are made of large basalt stones, and the entire width of the western side occupies the entrance opening. The staircase of the roof slab speaks about the fact that the chapel also served as a pedestal of the khachkar. According to the protocol of the Eastern slab, it was built in 1234. 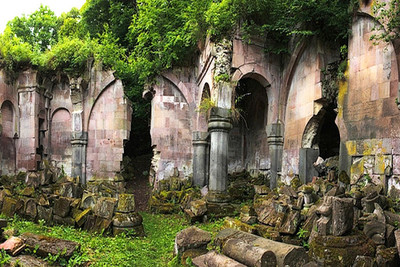 Dsegh Seas or Tsover Lake is a geological monument a few kilometers away from the Dsegh village.  It is a wonderful place to enjoy, to get away from the noise of the city. In addition, it has already been loved by the visitors.

It is also registered in the list of state natural monuments of the Armenian Ministry of Nature Protection. Lake Tsover is often mentioned in the works of the famous Armenian writer and poet Hovhannes Tumanyan. Tumanyan loved this place and often came here with his no less famous friends. 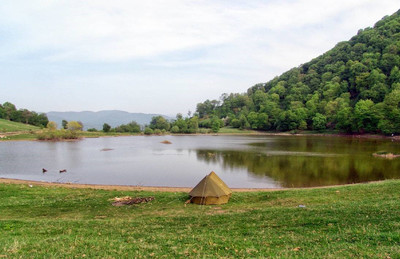 The museum preserves about 300 valuable exhibits representing the life and work of the great writer. A bust of the writer is placed in the yard, and a chapel was built here (1994), where the heart of the poet is summarized.

The museum has two floors, consisting of six rooms. On the first floor there is a bakery, a big room and two exhibition halls. The exhibits presented in the last two tell about Tumanyan's genealogy, his parents, and his years of study in Tbilisi (Georgia). The poet's bed, desk, clothes, and personal belongings are displayed in the two halls on the second floor. 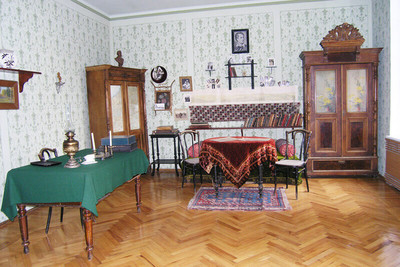 Hurry up to register for our two-day tour to Lori, as places are limited.