Let us figure out the famous architectural structures of Armenia together.

Zvartnots Cathedral is located in the Ararat Valley, 3 km south of the city of Etchmiadzin. This historical place was a popular place of worship in pre-Christian times. During the excavations, the foundations of the Urartian temple and the cuneiform inscription of King Rusa II were found here, which testify to the construction of the Hrazdan River canal. Moreover, in the territory of Zvartnots, there was a shrine of the pagan god Tir (god of education and sciences).

After the adoption of Christianity as the state religion, the pagan temple was transformed into a church. It is supposed that the Zvartnots temple was built in 643-652.

It is interesting that only Sebeos calls the temple "Zvartnots". In all other records, it is mentioned as St. Gregory Church. The temple stood until the end of the 10th century, most likely destroyed by an earthquake. Prior to excavations in 1901, the ruins of the temple were covered with earth. In 1905, the famous Armenian architect Toros Toramanyan excavated in Vagharshapat and restored the temple using the original stones.

The new plan of the temple was made by Toros Toramanyan. Many experts claim that Toramanyan's plan does not correspond to the prototype of the historic Zvartnots temple. It is built in the Armenian architectural style, decorated with Greek khachkars.

Zvartnots Cathedral was a unique architectural structure of impressive size. Instead of the typical cross-domed or basilica-type structure, Zvartnots presented a completely new style. The three-tiered, successively decreasing three-cylinder harmonious building was one of the tallest structures of its time (45-49 m).

It is also worth noting that Zvartnots was founded on the site where it is believed that King Trdat met Gregory the Illuminator. This is probably why Nerses III built the temple here. The consecration of the temple was attended by the Byzantine emperor Costas II. He was so impressed with the grandeur of the building that when he returned to his homeland, he hired the architect of Zvartnots to build a similar temple in Constantinople. The architect, unfortunately, fell ill and died on the way.

Moreover, the temple has been a UNESCO World Heritage Site since 1989. 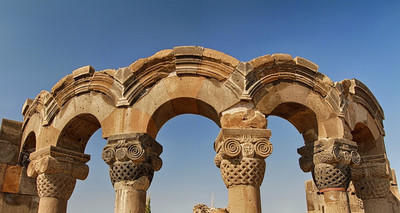 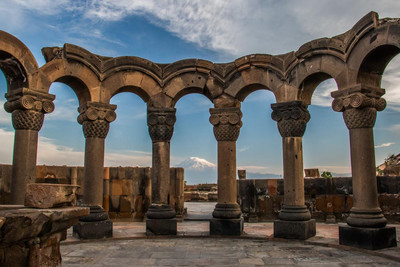 The various buildings of the Haghpat monastery complex, built at different times, eventually formed a complete, harmonious, asymmetrical, but balanced composition, each component of which and the details are in harmony with each other and with the surrounding nature. Surb Nshan Church (976-991) occupies a key and dominant position in the general panorama of the monastery, which is one of the exceptionally valuable samples of Armenian medieval architecture. A group of monuments forming the core of the complex was gradually formed next to Surb Nshan Church. The church belongs to the type of a domed hall, with a rectangular exterior, a cruciform plan on the inside, and two-storey apses placed in the corners.

The second vestibule of the complex (1255), which is also called "Hamazasp Chapel" after the abbot who built it, is located on the north side of Surb Nshan Church, about 8 m away. It is the largest of the arched vestibules, supported by four central columns supported by a square plan.

The third small church of the complex, Surb Astvatsatsin (13th century), is located on the north side of the porch of Surb Nshan church. The inner cruciform, but without the apses, is a centrally domed structure, the depth of the northern "southern crucifixes" being so small that in the plan they are included in the simple rectangular contour of the church. The church is also called Khatunashen, after the builder, Khatun, the daughter of Prince Hasan Desumyants.

This architectural masterpiece of the Haghpat monastery complex is completed by the bookstore, Hamazasp mosque, bell tower, refectory, St. Gregory Church, and numerous monuments of memorial and monumental art. The buildings were built in different periods, the earliest of which dates back to the 10th century. Haghpat served not only as a religious but also as a major educational center. Many manuscripts were written, copied, and flourished in Haghpat, which were also used in other scientific-educational centers of medieval Armenia. 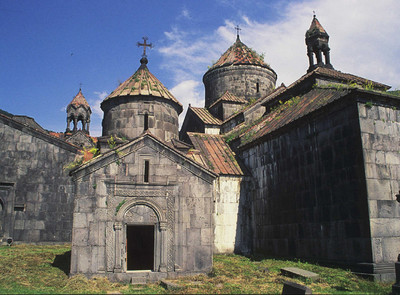 Republic Square is the main architectural complex in the center of the city. In fact, it is the main place for celebrations, parades, and public gatherings. Republic Square, which was built by Alexander Tamanyan, architect of the city of Yerevan in 1924-1936 is the heart of the master plan design.

Republic Square was once called Lenin Square, and in the southern part was a large statue of Lenin, which was dismantled after the collapse of the Soviet Union.

At present, Republic Square contains five impressive and impressive buildings, built in 1920-1950. The harmonious combinations of the nation did not prevent having a completely classical monumental architecture. And due to the color combinations of tuff, it does not oppress at all, on the contrary, it attracts with its monumentality.

The collection of prehistoric exhibits displayed on this floor can be considered one of the best in the world. Later the upper floors of the building were added. The National Gallery of Armenia, located in the same building, is famous for its rich collection of works by Rembrandt, Titian, and world-famous Armenian and Russian masters. "Arno Babajanyan" concert hall is on the left side of the building.

Singing fountains are organized in front of the National Gallery building, thanks to which Republic Square has become one of the favorite entertainment places of tourists, and locals. Outdoor concerts are often held here.

Writer-traveler Deerdo Holding called Republic Square "one of the best central squares built in the world in the 20th century." 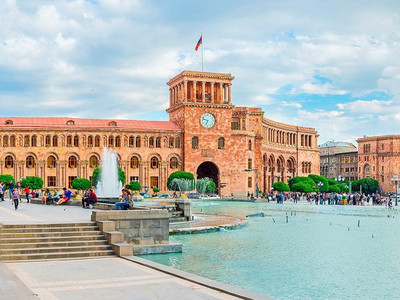 Another valuable structure of Armenian architecture is the  National Academic Opera and Ballet Theater after Alexander Spendiaryan. This architectural structure is also located in the heart of Yerevan, it is the masterpiece of architect Alexander Tamanyan. By the way, it won the main prize at the Paris World's Fair. The building is considered a symbol of musical culture, the majesty of which is expressed through architectural elegance and luxury.

In the yard of the Opera and Ballet Theater is "Freedom" Square, where the statues of the great Armenian poet Hovhannes Tumanyan and composer Alexander Spendiaryan are placed. Freedom Square is one of the most popular places for the guests of Yerevan, as it is not only a cultural center, but also a pleasant place to walk and enjoy the warm atmosphere of the city. 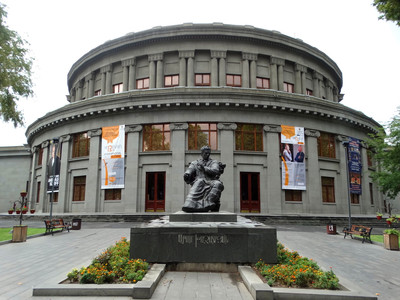 Goshavank is one of the major medieval religious, educational, and cultural centers in Armenia. It was considered one of the best educational complexes of the time. Such figures as the monk Vanakan and Kirakos Gandzaketsi studied here. At first, it was called Nor Getik, after the death of Mkhitar Gosh (1213) it was named Goshavank.

In the 13th century, it was a major religious, educational and cultural center of Armenia. There was a higher education institution, which in historical sources was called a college, university, or seminary. Foreign languages ​​(Greek, Latin), grammar, philosophy, rhetoric, music, writing art, and painting were taught in the Goshavank monastery. Kirakos Gandzaketsi and the Monk Vardapet were educated and worked here, who later continued the contributions of Goshavank College in the schools they founded. Many manuscripts were copied in Goshavank and were kept in the monastery's library.

In 1237–1241, Prince Grigor Tgha Amirspasalar built St. Gregory the Illuminator single-nave church, which Kirakos Gandzaketsi called "amazing" for the indescribable luxury and elegance of its decoration. The church, although small, stands out in the whole complex of Goshavank, its decoration is one of the most impressive works of Armenian medieval decorative art. During the reign of Father Martiros (until 1241), the monastery's wooden bookstore and the chapel next to it were built with large stones north of the porch. The khachkars are an integral part of the Goshavank complex. In front of the western facade of St. Gregory the Illuminator Church, on both sides of the entrance (the southern khachkar was moved to the State Museum of History of Armenia in 1935). The khachkar left on the north side, according to the inscription, was erected in 1291 by Archimandrite Sargis. 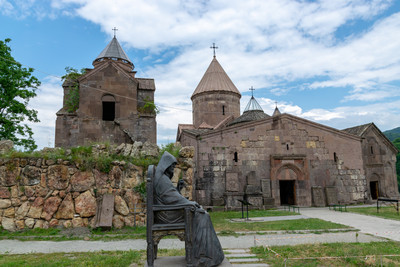 The Cascade Complex is one of the unique architectural-monumental complexes in Yerevan. There are exhibition halls, fountains, flower gardens, and sculptures in the complex. Above the complex is a monument dedicated to the 50th anniversary of the October Revolution (1967). Inside, in front of the complex, is the statue of Alexander Tamanyan.

The complex is built of travertine white stone, which is in harmony with the environment. The main idea of ​​the Cascade Complex was to present the national revival. Various architectural forms and artistic means of expression were used to make this idea a reality. The purpose of building the cascade was not only to improve the area but also to create a complex that would have a variety of uses.

Currently, the Cascade, represented by the Cafesjian Center for the Arts, serves the mission of showcasing the leading trends in contemporary art in Armenia and presenting the best of Armenian culture to the world. The center offers a variety of exhibitions, including a selection of works by Gerard L. From Cafesjian's collection. 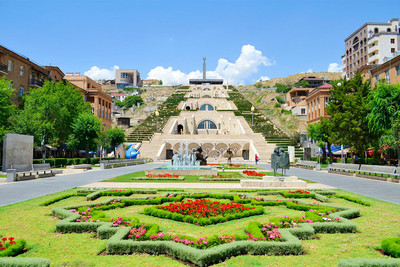 The pagan temple of Garni is a peripter-type structure typical of Hellenistic architecture (peripter - a prayer hall surrounded by columns on four sides). It stands on a high pedestal, in front of the main entrance of which there is a stone staircase consisting of nine steps. Combining lithographic, bibliographic, and archeological materials, it became clear that the temple was built by King Trdat I in 77 before our era.

Most scholars consider the temple to be a "Roman", or "Greco-Roman" monument, or link its architecture to general Hellenistic art, almost always emphasizing the peculiarities of the monument in the architectural-constructive art.

Garni fortress was the base of the defense system of the northeastern entrances of the Ararat valley. Later, a strong impregnable fortification structure was built here. The triangular area of ​​the castle is surrounded on 4 sides by a fence created by a sequence of 14 towers.

The decoration of the temple received special attention. The art of sculpture is based on the principle of using various motives - diversity in unity. The ornaments of the other parts and details of the temple do not repeat each other. Even the sculptures of lion heads carved on separate stones of the main cornice have different designs.

N. Tokarski appreciates the delicate sculpting technique in the structure. According to him, only local masters were able to achieve such equipment as the Romans who came from abroad dealing with light marble. But at the same time, he mentions that the pagan temple of Garni is the best example of how the local masters skillfully intertwined certain features of Roman architecture, lines in the Hellenistic basis. 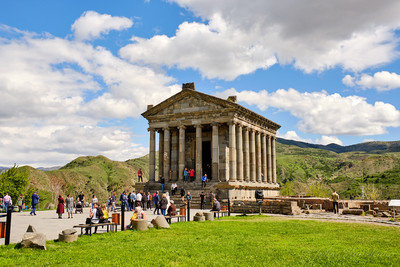