Museums are the main structures for the study, preservation, and dissemination of cultural heritage. Museums are a unique way to get acquainted with the culture, art, science, and history of a country in general. That is why we present to you the museums operating in the capital Yerevan. These museums are very interesting, informative, of course, they are a special part of our history.

The museums in Yerevan are must-visit places for those who want to get acquainted with the history and culture of Armenia.

The History Museum has undergone name changes over time.

The museum preserves about 400,000 items national collection with the following sections: archeology, ethnography, numismatics, documents, etc. The collections of the museum are supplemented mainly with finds, purchases, and donations found from the ancient sites of Armenia. However, the museum presents a complete picture of the culture and history of Armenia from prehistoric times, one million years ago to the present day. It also shows the rare traces of cultural exchanges in the Armenian Highlands of the countries of the Ancient East.

In the museum you can find: 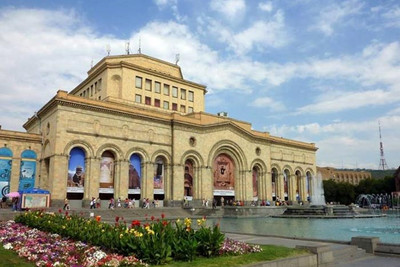 The National Gallery of Armenia is the largest art museum in the country on the high floors of the History Museum of Armenia. It is definitely a must-visit place for art connoisseurs. Moreover, it is the largest museum in the world with its collection of Armenian fine arts. The collection presented in 56 galleries of the Gallery gives an overview of the national fine arts, the history of decorative-applied art. This is because it presents the art of foreign countries from ancient times to the present day. The gallery displays world-famous artists such as Tintoretto, Donatello, Auguste Rodin, Vasily Kandinsky, Mark Chagall, Armenian painters Hovhannes Aivazovsky, Martu Aysardenk, Minas Avetisyan, Martiros Saryan, etc.

In the building of the museum, there was a public library and a concert hall. In addition, orphans who migrated from Western Armenia found refuge here. That is why the museum did not have exhibition spaces for the first four years. Further, the museum represents the development of Armenian painting of the 6th-20th centuries, all its stylistic diversity, as well as the works of individual masters.

The exhibition of the museum

The exhibition of the museum covers the art of different generations of Armenian masters living abroad and returning to the homeland, revealing common features for them. The works of the world-famous sea painter Hovhannes Aivazovsky (1817-1900) occupy an important place in it. The gallery houses Theodosia’s most prestigious collection of his works - 62 paintings, including Aivazovsky's compositions on Armenian themes ("Byron on St. Lazarus Island", "Noah descends from Ararat"). In them, his favorite sea scenes are in harmony with the Armenian motives. In addition, the latter makes more understandable Aivazovsky's care for his compatriots who survived the massacres, his interest in the creative development of many Armenian artists. 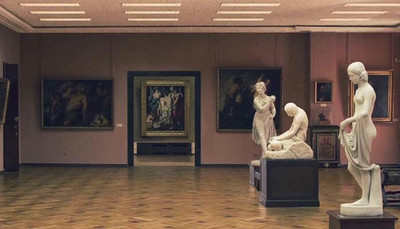 The Matenadaran is also the largest repository of Armenian manuscripts. It was established in 1921 on the basis of the Matenadaran of Etchmiadzin, established in the 5th century. On the other hand, it was the first scientific-research institution in Armenia. Formerly it was called the Cultural-Historical Institute.

In addition, the Matenadaran was registered in 1997 in the UNESCO World Heritage List. It is now considered "one of the most important places for the preservation and development of national memory."

The Matenadaran building is built in a neo-Armenian style. In the niches of the main front are the statues of "Anania Shirakatsi", "Movses Khorenatsi", "Toros Roslin", "Grigor Tatevatsi", "Mkhitar Gosh", "Frik". Further, in the small square inside, there is the statue of "Mesrop Mashtots and Koryun". And here, at the entrance, it is written the first sentence translated into Armenian.

In the arched halls on the right and left sides of the yard, details of Armenian architectural monuments and khachkars are displayed. In the lobby is the "Battle of Avarayr" mosaic (1956-60), on the walls of the main staircase is the three-part fresco "Armenian History" (1956-59). Near the main stairs, there are other frescoes by the same author. It depicts the Urartian period, the creation of the alphabet, and Mashtots mainly the Hellenic predecessors. 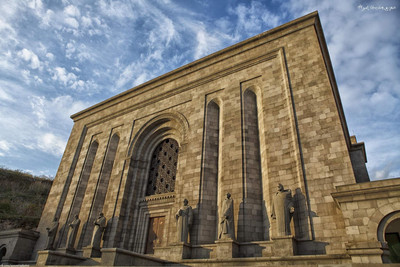 "Erebuni" Historical-Archaeological Reserve-Museum was founded on October 19, 1968, to mark the 2750th anniversary of the city of Yerevan. The museum was established on the basis of the findings of three famous ancient sites located within the administrative borders of the city of Yerevan: Arin Berd, Karmir Blur, Shengavit, and the remnants of material culture found from those sites. Today the reserve museum carries out its activity with "Karmir Blur" and "Shengavit" branches. However, it is the only archeological reserve museum to be visited by the public in the city of Yerevan, an Urartian center in the region.

The building of the Erebuni Museum repeats the composition of the Urartian palace structures. It also preserves the logical principle of a people's residential house enclosed around the inner courtyard with external deaf walls and sloping flat roofs.

The permanent exhibition of the museum presents the history of Urartu, the developed economy, architecture, and fine arts, irrigation and fortification systems, construction equipment, and material evidence of the state's progress in other areas. Moreover, 7 of the 23 cuneiform inscriptions found during the Erebuni excavations are presented here, including the cuneiform stone. The latter is considered a birth certificate of the city of Yerevan.

Exclusive exhibits of the museum that have been temporarily exported many times are exhibited in prestigious museums in the USA, France, Russia, and in exhibition halls. 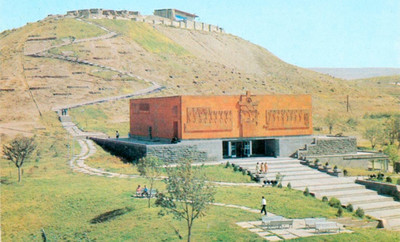 One of the main museums in Yerevan is the Armenian Genocide Museum, whose mission is to keep alive the memory of the 1.5 million Armenians who fell victim to the first genocide of the 20th century. The whole memorial complex (Tsitsernakaberd) has become a place of pilgrimage and is an integral part of the city's architecture. By the way, the flat roof of the museum building offers a view of Mount Ararat and the city of Yerevan.

The museum opened in April 1995. The museum's task is to collect, process, publish, preserve and display the documents concerning the Armenian Genocide, also to collect photos, books, and more. 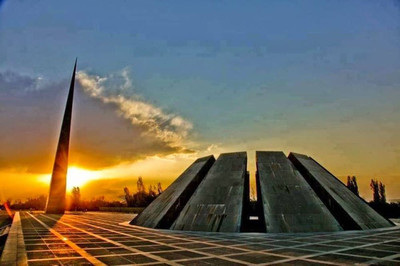 Cafesjian Center for the Arts (CCA) is the Center for Contemporary Art in the Cascade Complex in the Kentron district of Yerevan. It was opened on November 9, 2009. This art center was founded by American-Armenian businessman Gerard Cafesjian and presents Gerard Cafesjian's collection of contemporary art. The collection includes such famous artists as the works of Dale Chihuly, Fernando Botero, Jennifer Bartlett, David Breuer-Weil, Gi Yong Ho, Barry Flanagan, Jaume Plenza, etc.

The Cafesjian Center for the Arts is one of the largest charities of Gerard Cafesjian. Restoring the Cascade Complex in Yerevan, Cafesjian turned it into a center for contemporary art, featuring exhibitions, various educational, cultural, concert programs, and events for all ages.

The Cafesjian Sculpture Garden also includes the parking area in front of the Cascade. It houses one of the best collections of monumental sculptures in the world. The specially designed wide alleys of the garden, the flower arrangements create a modern environment for the placement of large-scale sculptures. Here you can see the works of famous artists Fernando Botero, Jaume Plenza, and Barry Flanagan. 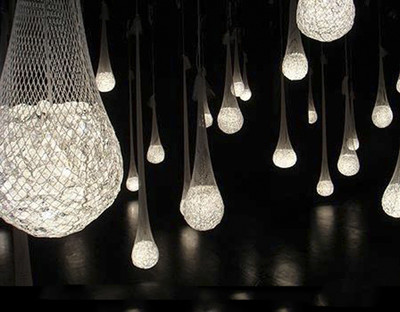 Those who love unique cultural elements should definitely visit the Megerian Carpet, where they can get acquainted with hundreds of unique samples of ancient, new handmade carpets, as well as the process of carpet weaving. During the tour, visitors can get an opportunity to see how the carpet weavers work on the patterns. They can also learn the history of this craft. Besides, there is a small, unique restaurant in the territory of the museum. Here you can taste the unique dishes of Armenian cuisine.

Megerian Carpet Company was founded in 1917 in New York. From the beginning, it was engaged in the repair and development of modern antique handmade carpets, as well as in the purchase and sale of them. For more than four generations, the Megerian family has been engaged in the restoration of old carpets and the production of new carpets.

In 2000, thanks to the efforts of the Megeryan family, the factory, belonging to the former "Haygorg" company, was renewed and equipped. Later, the Megeryans have expanded the production of carpets in Armenia. They also used such types of design and styling as Vaspurakan, Karabakh, Lotus, Lori, and other modern styling and solutions. At the same time, the produced carpets preserve the traditional style and design of Armenian carpets.

The Megerian rugs are in the palace of the Queen of England, in the presidential residences of Armenia, Russia, Georgia, France, China, Egypt, Bulgaria, Sweden, and other countries, in the sanctuary of the St. Lazarus Island church.

"Megeryan Carpet" company has an exhibition hall in Yerevan, where they organize some free tours. A museum was opened at the Megerian Carpet Factory in 2014. The oldest carpet on display dates back to the 17th century. The museum exhibition hall presents antique Armenian carpets, more than a hundred years old. At the same time, the Megerians keep most of the old carpets in New York. 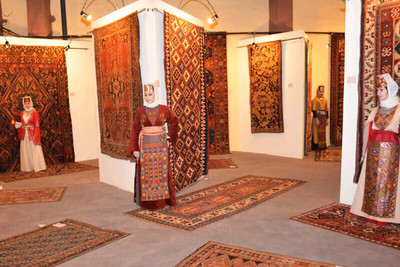 When talking about museums, we cannot fail to refer to the Sergey Parajanov Museum, which is a tribute to the great Armenian film director Sergey Parajanov. The museum's collection consists of about 600 works by Parajanov - drawings, sketches for films, dolls, hats. They have no analogs in the world. Parajanov's work is distinguished by high mastery, vivid imagination, and ingenuity. The variety of materials and materials used in his works gives a special charm and shine.

The Sergey Parajanov Museum was founded in 1988 after the first exhibition of Sergey Parajanov's works in the Homeland organized at the State Museum of Folk Art of Armenia.

The museum's collection consists of about 1600 exhibits. The main part is Parajanov's works. It includes various accessories, collages, drawings, sketches for films, dolls, hats. It also includes the furniture of the Tbilisi house, moved to Yerevan by Parajanov during his lifetime. The museum also displays unpublished screenplays, librettos, and various works of art created by Parajanov during his imprisonment. About 700 works are included in the museum exhibition. 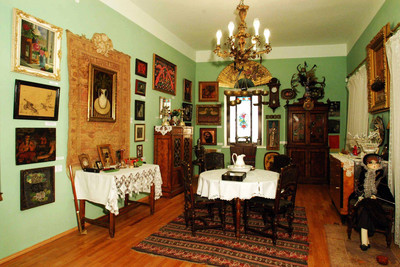 One of the best museums representing Armenian art is the museum of one of the greatest Armenian painters of the 20th century, Martiros Saryan. In addition, the building consists of a two-story house where the painter lived and worked in the 1932-1972 period, and a three-story gallery. The latter was built next to the painter’s house in 1967.

In 2013-2016 the Martiros Saryan house-museum was renovated, the fourth floor was built, where a multifunctional hall operates. Conferences, seminars, lectures, presentations, concerts, exhibitions are organized here. Moreover, the hall was named after the Master's son and bride, Ghazaros and Araks Saryans. 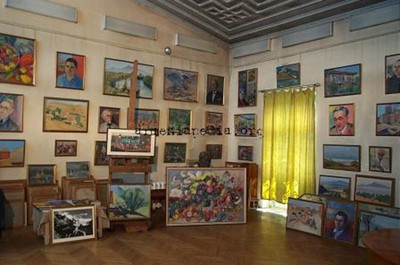 Lastly, we should also remind you that International Museum Day is an annual holiday celebrated on May 18. It has been celebrated in more than 150 countries of the world since 1978, including Armenia. "Museum Night" is held within the framework of the holiday. Armenian museums have joined the event since 2005. On that day, museums are open to visitors from 18:00 to midnight. So, it can be a great opportunity to visit museums and, of course, get to know the history of Armenia.