→ Blog → Everything You Need To Know When Visiting Egypt

Everything You Need To Know When Visiting Egypt

If you want to visit Egypt and explore the country in a comfortable climate, escape the period of heat, then September to April is considered to be the best time to visit Egypt. Visiting Egypt at the end of June when it is \hot, might be a crazy decision. However, it has its advantages as well. To clarify, in June there are fewer crowds and the necessity to get to sights super-early to escape the heat is easy. So, you can leave time for further exploration in the area or time to rest by the pool or sea.

Egypt has long been a popular tourism destination. You can dive in the Red Sea Resorts such as Sharm El-Sheikh, chase history on the Cairo-Luxor-Aswan trail, or dive in the  Sinai Peninsula․

While it is said the drinking water from the tap in Egypt is relatively safe to drink, it is heavily chlorinated, which also affects its taste. On the other hand, Egypt also suffers from severe water scarcity, so it is responsible to limit your usage all-round.

What to eat in Egypt?

We cannot fail to mention that food is one of the joys of being in Egypt. Nevertheless, you should focus on these points related to the food here:

What to wear in Egypt?

While no particular rules of attire exist at temples and tombs, you should be respectful to the culture and always be modestly dressed. So even though shorts, sandals and dresses to the knee at tomb and temple sites are not frowned upon, generally you should wear loose-fitting clothes that cover knees and shoulders. For mosques and other religious sites, you must be covered up and wear a shawl or headscarf.

The temperature during Egyptian nights can drop and evenings get chilly, so a light fleece or jacket or cardigan comes in useful to layer up. In addition, rain is not frequent, but neither is it uncommon, especially the further north, where it is cooler in temperature. So, consider having a waterproof jacket as well.

What to pack for Egypt?

Where to go in Egypt

Cairo is one of the most magical places in the world and the first place that we will recommend you to visit. The main tourist attractions are the Giza Pyramids on the city's doorstep. But the city itself is full of major monuments that span centuries of history. So, you can visit Egypt’s most iconic sight – the Great Pyramids of Giza and the Sphinx at the remote desert area of Giza west of the Nile River, before visiting The Egyptian Museum. The 10,000 artefacts here document every period of Egyptian history, including the tomb of Tutankhamun and the Egyptian Mummy Room.

The Pyramid of Cheops, also called the Great Pyramid or Pyramid of Khufu, is the largest one of the Giza group. You can explore its interior of narrow passages, although there isn't much to see, except a plain tomb chamber with an empty sarcophagus. Directly behind the Great Pyramid is the Solar Boat Museum.

Guarding these mortuary temples is the lion-bodied and pharaoh-faced Sphinx; one of the ancient iconic monuments in the world. 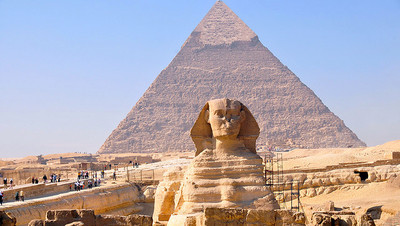 Climb Up to the Roof of Bab Zuweila

Of all the Islamic Cairo district's gates, Bab Zuweila is the most interesting. You can climb to the top of this medieval-era relic (built in the 11th century) for some amazing rooftop views over Islamic Cairo.

The gate itself has two minarets and is the last southern gate of the old town still standing. Right next door is the red-and-white stonework of the Sheikh al-Mu'ayyad Mosque. A few steps farther away are the fascinating artisan stalls of the Street of the Tentmakers, where Egypt's bright fabric used for weddings and other special occasions is sold in bulk. 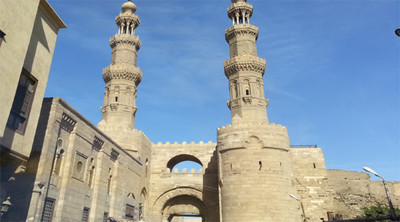 After an extensive restoration, which took several years, it has re-opened to the public. The buildings here are an eccentric riot of styles that cherry-pick influences from both traditional Arabic and palatial European designs, resulting in an over-the-top, lavish symphony of interiors. 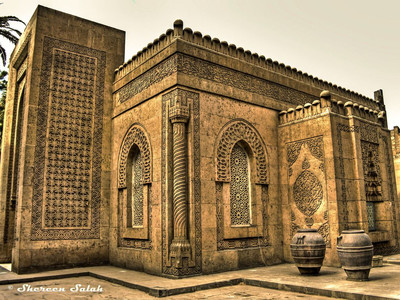 Caliph Al-Hakim is one of the most fascinating rulers of Egypt. We hope that you’ll have enough time to visit this place as well.

This Fatimid leader was renowned for his terrifying rule over the land, which included frequent murders of his royal household staff; nightly patrols of the streets of his city, dressed incognito on a donkey to make sure his subjects were behaving themselves, and issuing bizarre rulings across the country.

His mosque, finished in AD 1013, has functioned over the centuries as a madrassa, Crusader fortress, and psychiatric hospital and was completely restored in the 1980s.

The minarets here are the most interesting architectural elements. They were originally round, and their present square casing and domed top sections (resembling an Arab incense burner) date from their rebuilding after Cairo's 1303 earthquake.

The mosque sits in between two of the old city district's most important gates. Bab el-Futuh (Gate of Conquests) on the mosque's western side and Bab el-Nasr (Gate of Victory) to the east are similar in form to ancient Roman town gates and were both built in 1087. 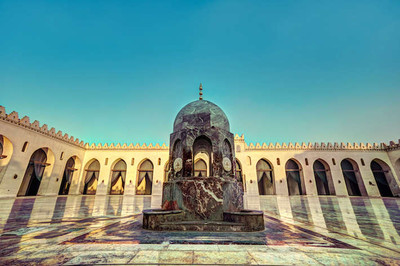 If you want to capture a sense of late 19th-century Cairo, when the city was nicknamed the "Paris of the East", take a stroll through the downtown district with your gaze diverted up at the car-exhaust blackened architecture rather than on the bedlam at street level.

The entire area is chock-a-block stuffed with gorgeous but crumbling Belle Époque buildings, which must have looked staggeringly glamorous when they were first built.

Some of the best remnants are around Midan Talaat Harb. On the western edge of Downtown, on Al-Gumhuriya Street, is 19th-century Abdin Palace, once the home of Egypt's last khedives.

Today, the former private apartments of the king are open as a museum and contain a bizarre collection of pictures, tapestries, and gifts that have been given to Egypt's presidents by visiting dignitaries. 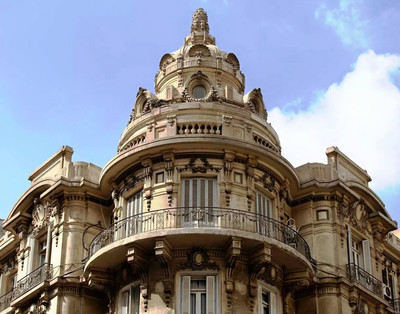 So, what can we summarize? If you want to see the beautiful sights of the antic world and also enjoy the sun and the sea, Egypt will be a perfect fit for that kind of vacation.