→ Blog → 10 Most Visited Places In Armenia

10 Most Visited Places In Armenia

Armenia is considered to be the most beloved country for discovering nature's sights for both tourists and locals. For that purpose, today we will present you the 10 most visited and interesting places in Armenia, although in reality there are many of them!
1.    Matosavank
Matosavank is located 3.5 km northwest of the city of Dilijan, Tavush region. The medieval monument consists of three adjacent structures: a church, a vestibule, and a library. To the south of the monument is a medieval cemetery with rough tombstones and khachkar pedestals.
It has two temples and one vestibule. The monastery complex includes S. Astvatsatsin Church, built by Avag Zakaryan, son of Ivane Zakaryan, in 1247. It is now half-ruined. There are sculpted khachkars on the walls and inscriptions. Matosavank is sometimes called Pghndzahank S. Astvatsatsin Church. 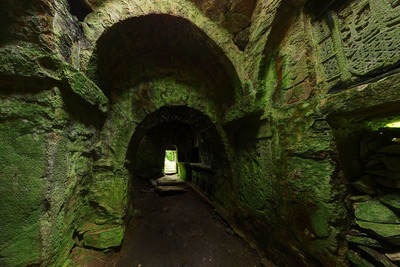 2.    Devil's bridge
The next favorite tourist destination is Devil's Bridge. It is a natural bridge made of travertine, located in Syunik region, on the Vorotan river. There are many mountain springs around the bridge, the waters of which paint the walls of the gorge in pink, yellow and green.
The Goris-Tatev highway passes over the Devil's Bridge. The width of the natural bridge is 60 meters, the length is 30. Not far from the bridge you can immerse yourself in hot spring water. You can even go down to the river to enjoy the view of the mysterious figures below the springs.
It is known that in ancient times, rich Armenians used to visit this wonderful cave during the summer months to take a healing bath. 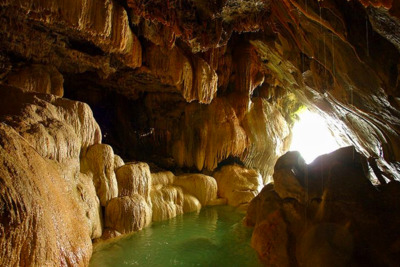 3.    Haghartsin
Haghartsin is a monastery complex of 10-13 centuries. Legend tells that during the opening and consecration ceremonies of the monastery, an eagle soared on the dome of the main church, thus becoming known as a player (or soaring) eagle monastery ("hagh" means game and "artsin" means eagle). And so, the word Haghartsin originated from there.
The Haghartsin complex consists of three churches, two vestibules (one of which was destroyed), a refectory, chapels, and khachkars. In the territory of the monastery, there are prayer halls on the rocky slope, sculpted khachkars.
The bronze boiler weighing 350 kilograms found in Haghartsin is one of the high-art samples of artistic metallurgy․ The engraving on the crown of the lip marks the year of manufacture - 1232, the four edges are statues of lions, the legs are also artistically decorated. 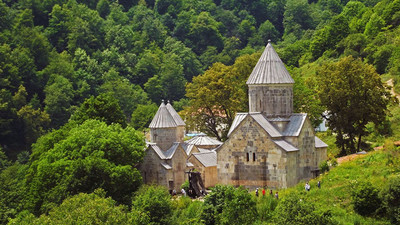 4.    Khndzoresk
Khndzoresk is famous by many for its rocking bridge, which, in addition to extreme feelings, allows you to admire the nature of Armenia with its clean and clear air. The bridge was built in 2012. The bridge is 160 meters long, 63 meters high, and weighs 14 tons. The bridge can simultaneously "serve" about 700 people of average weight. 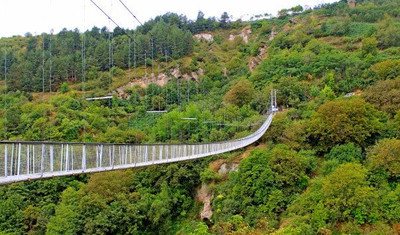 5.    Kecharis
Tsakhkadzor resort complex delights its visitors not only with luxurious nature, modern hotels, and places of entertainment but also with architectural monuments, one of which is Kecharis. It consists of four churches, a vestibule, and two chapels, the main of which, St. Gregory the Illuminator Church, was built in 1033 by Gregory the Magistrate, as evidenced by the inscription above the southern entrance.
It is said that at the request of one of the princesses of the Pahlavunyats dynasty, a large fortress was built in this beautiful valley, and a magnificent flower garden was built next to the fortress. The girl demands that the most beautiful flowers in the Armenian world grow in her flower garden. That is how it is done. But one spring the strong wind destroys his flower garden and scatters the flowers all over the valley. The gorge is filled with flowers, and the gorge begins to be called Tsakhkadzor. The princess demands that her father build a monastery near her fortress so that the abbots can pray day and night and return the scattered flowers. The Kecharis monastery is being built. But God does not hear the prayers of the monks, so, the flowers are spread all over the province. 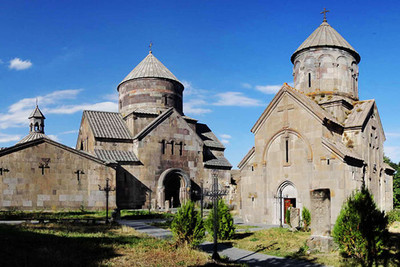 6.    Garni Temple
The pagan temple of Garni was built in AD In the year 77. It is located in the Kotayk region of Armenia, on the left bank of the Azat River. The temple was dedicated to God Mihr, the god of light in Armenian mythology.
Garni Temple is the only pagan Greco-Roman structure preserved in Armenia. Garni is believed to have survived as it was widely regarded as a "masterpiece of art". It is believed that the temple of Garni remained intact thanks to Khosrovdukht, the sister of King Trdat III. Khosrovdukht asked his brother not to destroy the Garni temple, which was of great importance to him. 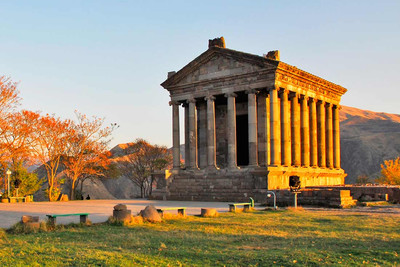 7.    Geghard
If you visit Garni temple, you cannot just pass by Geghard monastery. Geghard monastery is located near Goght village of Kotayk region, in the upper stream of Azat river, on the right bank. Here is kept the famous spear with which the Roman soldier pierced the side of Christ. It was brought to Armenia by the apostle Thaddeus, one of the first preachers of Christianity. Now it is in Vagharshapat, in the history museum. Geghard Monastery is a UNESCO World Heritage Site. The main group of monuments created in the 13th century includes the main Katoghike church, the vestibule, the 2 rock-cut churches, the chapel-tomb. 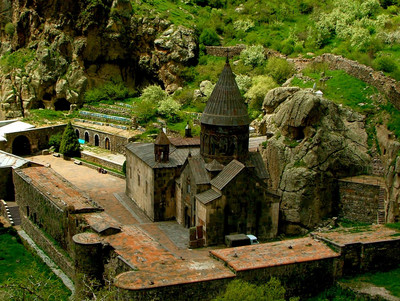 8.    Tatev Monastery
Tatev Monastery (IX-X centuries) is located in the Syunik region. The monastery has a rich history. The Tatev monastery complex was not only a caring but also a large educational and cultural center. It was home to one of the best universities in medieval Armenia, where the humanities were studied. The monastery is located almost on the edge of a cliff, from where a beautiful view of the gorge opens. In the past, the road to the monastery was quite long and difficult․ You needed to cross the mountain by a difficult road to reach the monastery. However, after the opening of the "Tatever" ropeway, the monastery became easily accessible. By the way, it is also worth noting that the "Tatever" ropeway is registered in the Guinness Book of Records as the longest reversible ropeway in the world, which runs without stopping. 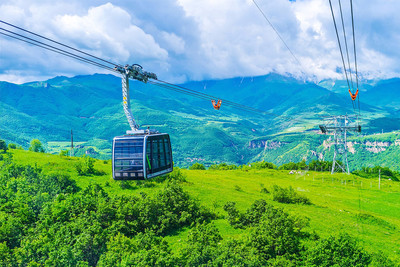 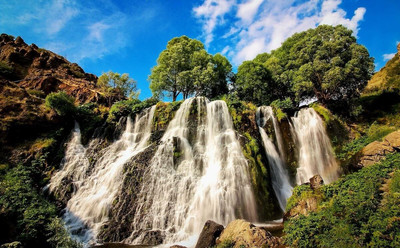 10.     “Mendz Er” cave
“Mendz Er” cave is located on the road leading to the Sanahin-Sarahart district of Alaverdi city of Lori region, which has already managed to become one of the most visited tourist centers in Lori.
The formerly inhabited cave, which later served as a hiding place and then as a barn, is now a museum, home to a locally known "Menz er" lodge with life-size mannequins, a forge, and a small pond inside the cave.
Inside the cave are samples, tools, plates of the 9th-10th centuries. The process of spinning, grinding flour, the life of an old man from Lori is depicted with the help of mannequins and dolls. 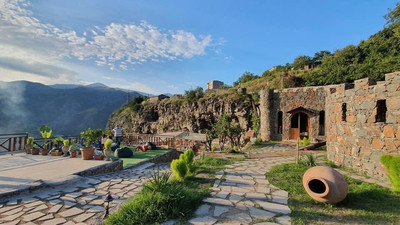