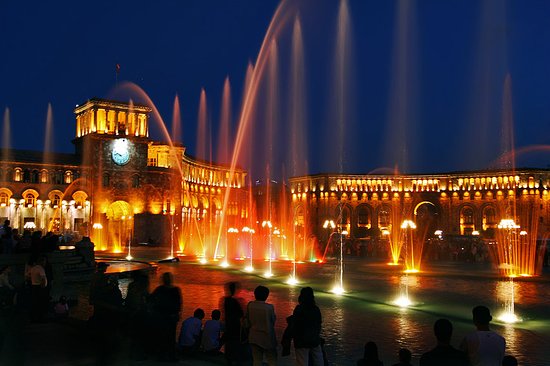 Republic Square or as it is popularly called "The Heart of Yerevan" is located in the very center of the city and is considered one of the most amazing and famous sights of the capital, as well as one of the most beautiful squares in the world.
The construction of the square was carried out by the Armenian architect Alexander Tamanyan in 1924 and lasted until 1958. All the old buildings were demolished and replaced with new ones. The square is surrounded by five buildings:

All the buildings surrounding the square are unique examples of architecture. The buildings designed with arches, columns and national ornaments are mostly built of pink tuff and create a delightful architectural ensemble. Because of the color of the volcanic stone, Yerevan is often called the pink city.
The cherry on the cake are dancing and singing fountains in the center of the square. Locals and tourists from all over the world come here to brighten up their Yerevan nights with good music. Fountains are open every day from the end of May to October, the show starts at 9 pm and lasts until 12 pm, riveting people's hearts to its colorful performance. The show program includes masterpieces of world classics, national music, rock and pop motifs of the 20th and 21st centuries. The show always ends with Charles Aznavour's song "Eternal Love". Both fountains and their colors change according to the rhythm of the song or music being played. Fountains can be visited both during the day and at night, because each time they offer different performances: a snow-white dream under the sunlight and a colored fairy tale, as a helping hand to the moon and stars in the dark of night.